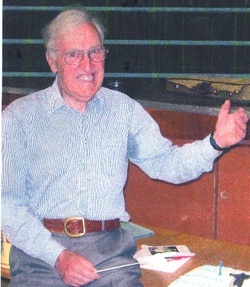 Stanley Evans, founder conductor
On an April day in 1988 some eight people, amongst them Geoffrey Vere and Stanley Evans, met at the Clarke Foley Centre in Ilkley to discuss the feasibility of forming an amateur orchestra which would meet regularly at the centre. The proposal was received sympathetically but several concerns were raised. Would a sufficient number of player be available? Could a practical balance of various instruments be achieved? What kind of music would attract players? How would printed music be obtained?
Clearly some money would be required. Geoffrey Vere, who had called the meeting, revealed that there was a charity, known as the New Horizons Trust, which gave assistance in setting up activity groups for retired people, including making grants where appropriate.
The decision was made to proceed both with seeking such a grant and with setting up the orchestra. It would play a range of music to satisfy a wide interest - light music, show music, classical music - and a committee of ten would oversee the pursuit of funding. The Orchestra would recognize its founding benefactor (if successful) by adopting the name Ilkley New Horizons Concert Orchestra.
On Friday 6th May 1988, a small and unusual assortment of instruments - and their players - was assembled for a first meeting. Since that rather uncertain start the orchestra has continued to meet at the Clarke Foley Centre on Friday afternoons. A cheque for £1,750 was received from the New Horizons Trust, which allowed the new orchestra to buy a conductor's desk, music stands, timpani and an electric keyboard.
The orchestra was sufficiently well-established to be able to hold a first Annual General Meeting in February 1989 when officers were elected and the constitution required by the Charity Commission was adopted. It was modelled on that of the Leeds Sinfonia. Initially the orchestra met in the Jack Lofthouse extension at the Clarke Foley except when, once a month, displaced by the Stroke Club. In those weeks, a variety of other meeting places had to be used. The main hall was not available for some years, as it was used on Fridays by the choir. When that disbanded, the hall became the orchestra's permanent home.
The Clarke Foley Centre has been very generous over the years in providing secure storage for timpani, stands and music. This has permitted the building-up of what must be one of the largest amateur orchestra libraries in the country. It now fills two large cupboards and two filing cabinets!
An annual event from the early 1990's has been an orchestra workshop, held on a Saturday in the early Spring. Originally Stanley Evans' initiative, and led by him, in recent years the regular conductor has been David Dawson. The very first workshop, augmented by members of the Baildon orchestra, worked on Dvorak's 8th Symphony, with a final play-through at the end. Over the years the workshops have explored symphonies by Beethoven, Brahms, Borodin, Dvorak, Franck, Edward German, Mendelssohn, Schumann and Tchaikovsky amongst others.
Stanley remained our Director of Music and principal conductor until his death aged 87 in 2011, to be succeeded briefly by Arthur Butterworth and Ruth Cheney.  We have also welcomed a number of guest conductors including , Peter Gaunt, Paul Greenwood, Chris Higgins, Peter Jamieson, John Large and Andrew Mclaughlan. Finding  "guest conductors"  the immediate and only solution following Ruth's unexpected death, we adopted it with enthusiasm and have now built up an impressive array of regular conductors The 2018 panel of conductors comprises David Dawson, our Director of Music, Martin Binks, Patricia Brierley, Elaine Levene, Barry Sugden, Philippa Jennings and Peter Young.
A memoir written by Stanley for the orchestra's 20th birthday in 2008 records that "members of the orchestra are divided in their views about giving concerts" and notes that no regular programme of concerts has ever been adopted. However the orchestra is quite frequently asked to provide entertainment for events at the Clarke Foley centre. Until recently that always included the "Over-90s Party" and in 2014 we played for an event marking Le Grand Depart of the Tour de France. Our Christmas Concert, which seeks to raise money for charities, is now an annual event at the Clarke-Foley centre.
Although the orchestra was originally established to cater for the musician with retirement leisure, we have occasionally been joined by younger musicians who happened to be free on Friday afternoons. Now that the Clarke Foley Centre has opened its doors to people of all ages it may well be that we are able to attract more younger players.
The orchestra has been loyally supported over the years by people willing to take on officer roles. They have been as follows:
Chair: Stuart Woodhouse, Betty Bruce, Vivienne Blackburn, Alan Caunt, Pat Eyres, Allan Jarvis, Patricia Brierley
Secretary: Harry Jackson, Betty Hinchliffe, Mary Sugden, Pat Eyres, Tony Johns, Adrienne Fox, Inge Cramer, John Slack
Treasurer: John Chant, Betty Humphries, Harrison Fletcher, Rosemary Jackson, Alastair Headley, Jenny Pease
Leader: Bernard Shone, Charles Gardner, Bill Philpin, Joan Warburton, Pat Eyres, Hazel Thompson
Librarian: Brian Hampton, Geoff Tunnard, David Pickup, Allan Jarvis.
﻿Making Music in Ilkley since 1988﻿